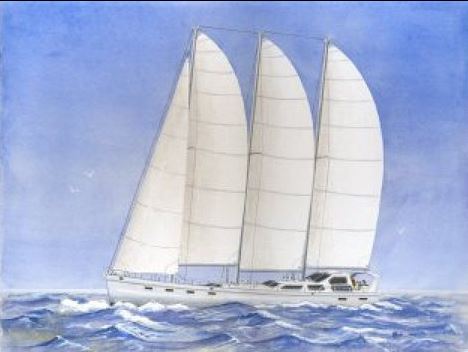 Zebulun was the brain child of Loren Murphy after sailing as a missionary in the South Pacific starting in 1985. Over the past 20 years Loren has sailed over 42,000 nautical miles reaching over twenty countries and island nations. These experiences as a missionary and providing relief work were the catalyst for this project. Loren shared his ideas with Michael Kasten of Kasten Marine Design, Inc.

Zebulun was designed as a highly capable long range, fast and safe offshore sailing vessel in aluminum for sailing expeditions ranging from the tropics to the arctic.  The original intent was that Zebulun be capable of doing rescue work, mission work, and relief supplies delivery for troubled areas. Long range under power was also a primary requirement, thus one could legitimately refer to this as a true motor-sailor, with 100% functionality in either mode. Zebulun’s lines will provide high performance in an easily driven hull, planned for maximum speed and the fastest passage times. The twin keels and rudders allow her to sit down where there is a big range with the tides. The interior layout has been planned around an extended family, or a large charter party.  As such, Zebulun will also make an exceptionally fine charter vessel.

Hull Particulars are as follows:

Displacement will vary from around 195,000# when lightly loaded, to a maximum capacity of 259,000# with tanks full, stores for twenty people, and the boat ready for a long passage, or alternately loaded with a cargo of supplies.  As we can see from the above data, Zebulun is of nearly ‘ultra-light’ displacement.  Hull speed is predicted to achieve nearly 18 knots.  Typical sailing speeds in favorable conditions should be in the range of 12 to 14 knots.  In other words, built for comfort AND speed…!

Zebulan is now for sale

It would be the desire of MurSea Missions to have this yacht finished as is was originally intended, however we know that is very unlikely. We believe this vessel could be utilized for several functions other than doing relief work. Charter or Expedition or private use are all possibilities. An individual, group of individuals or company could purchase the project. As stated above, we simply wish to see the yacht’s construction completed.