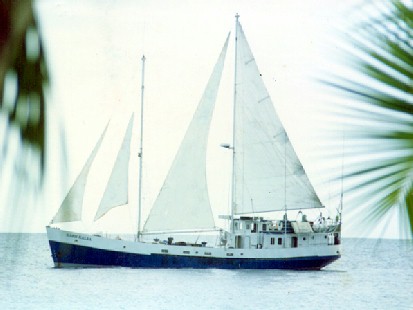 The Mission Boat M/V Kaksi Kalaa left Finland for her sailing voyage to Tahiti in 1988. The French Polynesian authorities did not give the long term visas, because at that time Finland did not belong to the European Union countries.

Accompanied with the sorrows and disappointments the vessel moved into the neighboring Cook Islands, where the cooperative work with the local national AOG movement was not at all a change into worse! Rarotonga stayed as the home base for the missionaries and the boat.

The Government of the Cook Islands soon requested M/V Kaksi Kalaa to do emergency trips by taking the relief supplies to the outer islands. She did also evangelistic voyages, which by the requests of Tongans and Fijians reached to the islands of their countries, too.

M/V Kaksi Kalaa helped transporting building materials for the new churches, and the activities of her pioneering evangelistic teams resulted new congregations to be born.

Due to the very heavy economical depression in Finland her new activated operations could not continue, even everything on the field was ready to go on with the program. She was fully donated and nationalized to Fijians, who later implemented the boat to become a part of the South Pacific Bible College in Suva, where the desire was to use her for the evangelistic activities of the students.

Pastor Jone Kata was always very active with M/V Kaksi Kalaa, since she came to Fiji for her first dry-docking. Jone and his wife Liti have had the strong vision for the mission boat work on the South Pacific.

Jone left his position as the Principal of the South Pacific Bible College in order to help better the Kaksi Kalaa -project. He wanted to commit himself fully to revive the desired activities for this vessel, as one of its own separate department. Due to another local approach the boat still continued staying put under the care of S.P.B.C.

The individual volunteer donations had been the only resource of the support for the covering of the expenses of this mission boat project, which went fully hard hit grounded on the bottom of the low tide of the economical depression! M/V Kaksi Kalaa finally sunk in the anchorage in front of the city of Suva during the summer 2001, while delayed in waiting for the dry-docking due to the local difficulties in arranging enough cash.

The responsible field workers with M/V Kaksi Kalaa do not want anything like this to repeat, therefore new ways of the approaches for the mission boat activities have been executed for serving the South Pacific Islands region.

Even the financial resources were not by might and power of the great number of people due to the recession, however there were all the time faithful individuals praying for the Kaksi Kalaa ministry. These prayers were never in vain in the Lord Jesus Christ.

M/V Kaksi Kalaa helped to create the South Pacific AOG Gen. Superint. Forum, which later performed the Kaksi Kalaa Mission to function as the special agent to reach to the Christian boaters in the other parts of the world, that they could come over with their own boats to help transporting national workers to preach the Gospel in the faraway outer islands

Now the missionary flame is burning in the Cook Islands, where the Polynesia School of Missions was established in Rarotonga, as a part of the Polynesia Islands Mission (PIM), which solely concentrates to the systematic evangelization of the whole Polynesia! There are still for about 300 unevangelized islands scattered widely around within the Polynesian sea territory, which is roughly three times the size of Europe. The very biblical ends of this earth, those most uttermost parts from Jerusalem are to be found in Polynesia, which geographically is the ultimate goal area of the Great Commission!

Kaksi Kalaa means in English = Two Fishes (Kaksi = Two, Kalaa = Fish). We believe, that God by his own manifold ways can keep the whole affair of Kaksi Kalaa in His safe blessing hands and make the miracle of the multiplication so, that enough mission vessels with enough background funding will become to meet the needs of the on going evangeliza- tion of the South Pacific Islands.

Note: Pastor Sepesa was moved by heart and cried in tears on the wharf, when he first saw the mission boat M/V Kaksi Kalaa in Lakemba. Her kind of good rough weather sea vessels are needed for the work of the evangeliza- tion. Pastor Sepesa had been earlier ship- wrecked with the smaller and weaker wooden boat, and drifted on the waves for days by hanging on the piece of the plank with his own small son. He is not the only national pastor, but there are also others, who have gone through the similar trials of the drifting in water of the very rough ocean, prayed for their lives, and for the proper mission vessels to become provided for the transportation of their evangelistic outreaches.