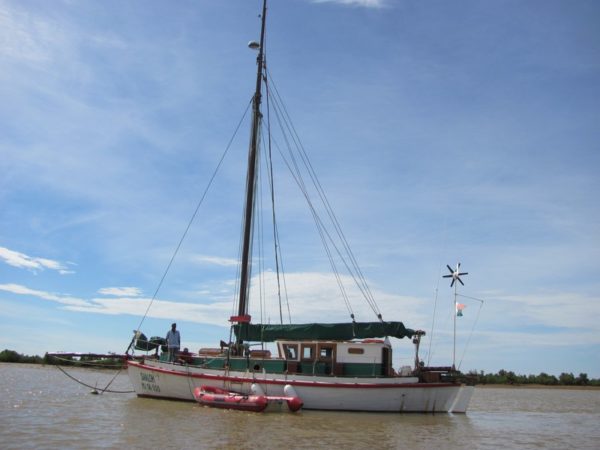 We have long thought about writing a little about the situation around the many famous and beloved Shalom boat. For many missionary friends in Norway, Shalom has been tantamount to the Shalom boat, and many have invested a lot of time, money and dedication in the great Colin Archer ship that was built in Mahajanga! We hope most of you have been part of the process that went on last year, but here comes a small summary anyway.

It has been a great tool in the work of Shalom as a means of access to very remote villages along the coast, but unfortunately for several years it has been seen that there is no economy in Shalom to operate it. It has been very expensive in operation and maintenance and crew, besides having seen that there is no competence here to maintain such a Norwegian sailboat and use it in the best way. NMS has provided huge sums for both operation and maintenance since it was built, thanks to the commitment of many of you Shalom friends. However, there has always been a planned reduction of NMS support and thought that Shalom would run it himself. Shalom has not found ways to raise funds on his own, and after several years of trying, you had to put your finger in the ground and realize that you did not have the capacity to have it. It became the big money-out over something else. It’s a shame, but no solution has been found other than to sell it.
It is important for us to remember that the Shalom boat has always been a tool in Shalom work – not an end in itself. It has therefore been very regrettable that so much financial means have been used for the “means” and not for the goal itself – namely the Shalom work in the villages. Throughout 2010 and parts of 2011, the boat was out of service due to technical problems, and work went on anyway. Now you use other ways to get to the villages – be it by local boats, car or helicopter.

The latest news we have been able to find online is this post from 2011, perhaps Shalom has been replaced or has simply been retired.
If you can update us please drop us a quick email with any information.
thanks

Shalom is still in the process of deciding whether to buy another, local boat, or whether to rely on renting a boat when needed. The sale itself has been delegated to the church’s headquarters in Tana, where there are people with special expertise in buying and selling.
Please feel free to ask that the boat be sold for as much as possible, and that it should happen in the near future. If there are any boat-interested people in Norway who would like to buy the Shalom boat, just tell us! Maybe someone has a secret dream of a sailing adventure along the coast of Africa that could come true now ?!